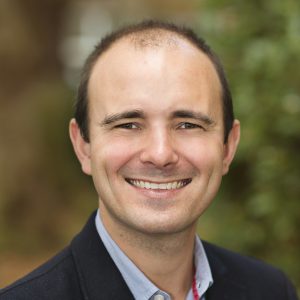 Dave joined the staff of St Peter’s as a Curate in the summer of 2014 after three happy years training at Oak Hill Theological College.  He became Associate Vicar in 2017. He’s married to Catrin and father to three pre-school girls.  They’re excited to be back at St Peter’s (having been members of the congregation before Dave’s training) and are looking forward to introducing the girls to walks along the river.  Before training for ministry, Dave completed a PhD is in particle physics.  He does his best to keep abreast of what’s going on in the scientific world and is interested in the relationship between Christianity and science; he’s more than happy to talk about both, along with the (mis)fortunes of the Welsh rugby team!